Flightdeck Experience is part of a larger entity forming a trio of locations under the banner of Virtual Aerospace (VA).

Virtual Aerospace has been operating since 2010 and acquired Flightdeck Experience in 2017. As the third location along with Sywell and Shoreham-By-Sea our Greater Manchester hub is the home of the Vulcan Bomber Simulator which is the ONLY one in the world!

Flightdeck Experience has recently moved location from Bacup to Stockport. Heading a little south has led to us having larger premises,  more simulators (including the new Harriers) and even a cafe!

Our staff have a passion for aviation and are dedicated to offering you the most authentic experience. Our Instructors are required to be professional pilots and as such can make the experience as technically realistic as you require.

All experiences can be tailored to your request so if you are brand new to it, a simmer in your spare time or a professional pilot we can provide a fun, informative and memorable experience. 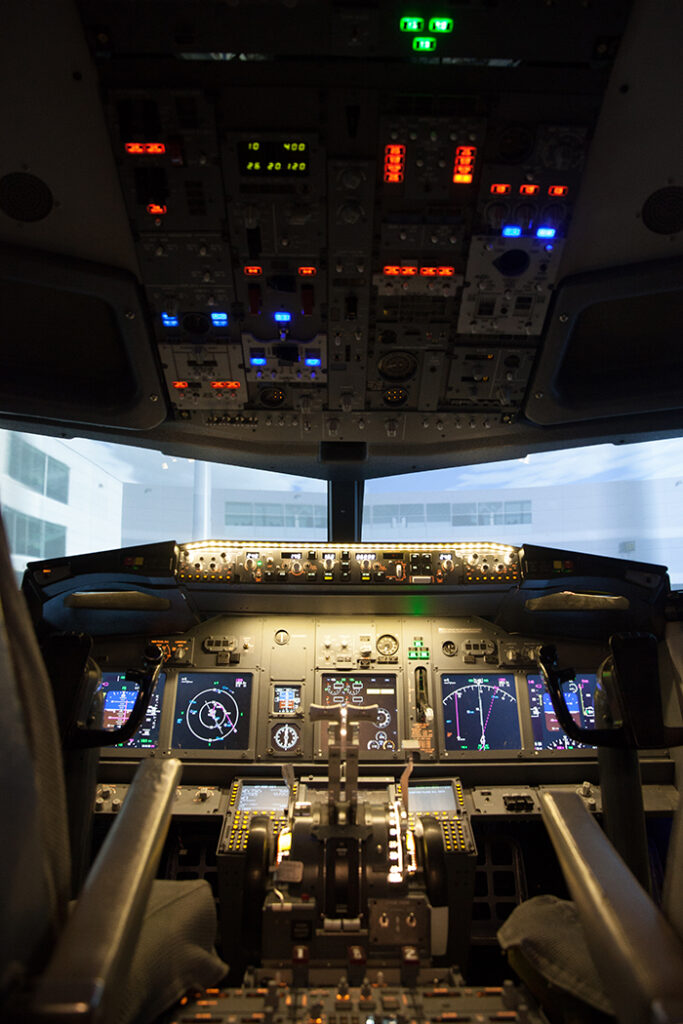 Initially the company (VA) was started to offer the general public a professional cockpit to fulfil their dreams of becoming a Jet Airline Pilot, or at least, get close to the feeling of being one.

Our simulators needed to be at a level where they can be given as a present to the aviation enthusiast, someone after a new experience or be hired out to professional pilots if they need the hours.

It started as a fun business to occupy the managing director after he sold a previous company. He had always had an interest in aviation, previously having been an air traffic control assistant and also gaining his commercial pilot training. The recession at the time caused him to change tack but the love of aviation never left him.

This business was supposed to be only fun in the beginning but as it turned out, it took off (no pun intended) in a big way!

One sim became two, two became three and here we are. The UK’s Largest Flight Simulator Company. Three locations, four simulators including the 737-800 Jet Airliner and the World’s ONLY Vulcan Bomber flight simulator, tested by 737 and ex Vulcan pilots for accuracy.

Our simulators are primarily fixed base which means they physically don’t move. With visual trickery and sound effects, you will be convinced that they do!

That said, we are pleased to be one of the few flight simulator companies with access to FULL MOTION simulators through our agreement with Quadrant Systems. Yes, they are more expensive but they are on another level completely and what professional pilots use while training to fly the real thing!

Whatever your wallet allows, we are able to offer a fun and informative experience to give you the feeling of being a commercial pilot or a military pilot flying legendary tactical aircraft.

This error message is only visible to WordPress admins

Learn more about our partners >

Cookies allow for us to better serve information to the user. You may find that rejecting them negatively impacts your experience with the site. By clicking “Accept”, you are consenting to the use of ALL cookies.
Cookie settingsNo Thanks!Fine with me!
Privacy Settings

This website uses cookies to improve your experience while you navigate through the website. Out of these, the cookies that are categorized as necessary are stored on your browser as they are essential for the working of basic functionalities of the website. We also use third-party cookies that help us analyze and understand how you use this website. These cookies will be stored in your browser only with your consent. You also have the option to opt-out of these cookies. But opting out of some of these cookies may affect your browsing experience.
Necessary Always Enabled

Any cookies that may not be particularly necessary for the website to function and is used specifically to collect user personal data via analytics, ads, other embedded contents are termed as non-necessary cookies. It is mandatory to procure user consent prior to running these cookies on your website.

Want to be the first to learn of news / discounts from Flightdeck Experience?

Please confirm your subscription and you are on the list to receive our newsletter!